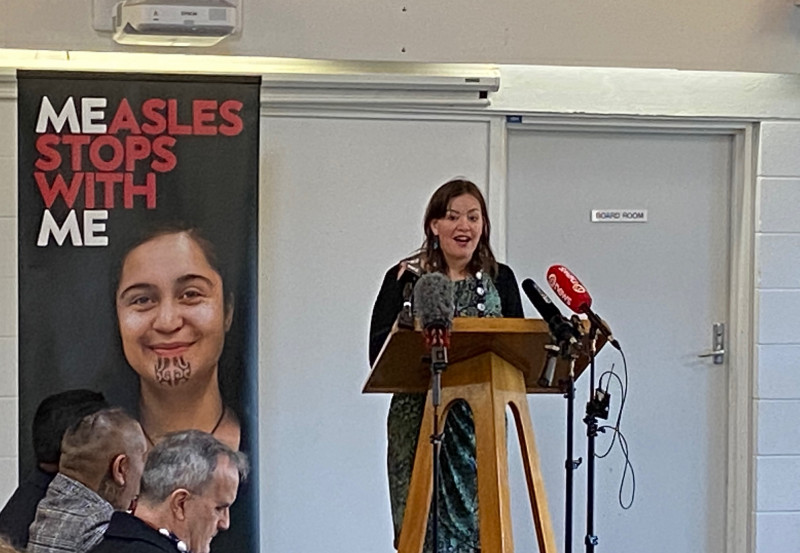 Media Release 31 July 2020| The Government is stepping up the fight against measles and protecting hundreds of thousands more young adults by investing up to $40 million for a year-long measles-catch-up campaign and $23 million to fully fund and develop the National Immunisation Solution, Associate Minister of Health Julie Anne Genter announced at Mangere College today.

“We are making it as easy as possible for young people, Māori and Pasifika people especially, to get vaccinated. Now, immunisation is available in a variety of places, such as schools, workplaces, pharmacies and marae.

“Previous governments have not prioritised measles vaccinations in the community, and as a result we fell below the 95 per cent herd-immunity point that prevents outbreaks of measles, this campaign will help get us to that point.

“COVID-19 has disrupted immunisation programmes around the world, increasing the risk of severe outbreaks once travel resumes.

“That’s why we’re doing a catch-up campaign focused on the roughly 300,000 young adults aged between 15 and 30 who are not immune to measles, as their immunisation rate is generally too low to prevent a measles outbreak.

“DHBs know their communities well and how best to target the extra vaccines. They’ll start rolling out their measles campaigns shortly, followed by a national campaign later this year.

“The National Immunisation Register was first set up in 2005 and no longer fit for purpose.

“That’s why this Government has invested $23 million to fully fund and develop the National Immunisation Solution - in efforts to ensure we better monitor who is and isn’t getting measles immunisations, and when a COVID-19 vaccine is developed, we are ready to roll out a mass vaccination programme.

“Let’s protect those around us. Immunisation is the best way to protect and prevent future outbreaks. I encourage whānau with children and people aged 15-30 who may not have been vaccinated to contact their GP to book an appointment. If you're over the age of 15 you can also get the vaccine at some pharmacies,” Julie Anne Genter said.

22 months ago Less than a minute to read Communications Team