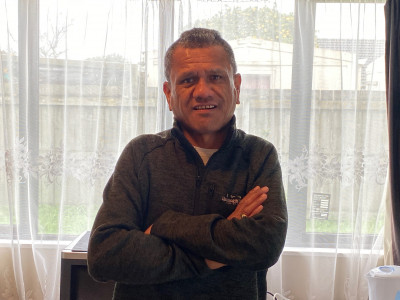 For 60-year-old Maangere local Haawi Baker, doing a bowel screening test was the last thing on his mind when he went on holiday with his wife at the end of last year, but getting a reminder letter and another bowel screening test kit in the New Year, prompted his wife to change her mind. Haawi was grateful she did.

“We came back [from our Christmas holiday] and we got sent another test. My wife said she’s going to do it, so I decided to do it as well. I got a phone call from my doctor in Ootara. He told me there was a problem,” Haawi says.

In February, Haawi was seen by specialists at the Manukau SuperClinic where he had a colonoscopy. He was diagnosed with cancer in the upper rectum. It was confirmed as stage 1 bowel cancer.

“They said if they found out later, I would have had to go through radiation, but it was caught early which was good. They cut my cancer out and they put a stoma in me. The [surgeons] said I have to wait a couple of months before I can have stoma reversal surgery,” he says.

“It was hard when I went through my operation. I was scared; I was frightened. I’ve never been through it before. I was carrying all these bags around me, which was terrible, but it worked. I feel good now.”

Haawi and his wife Joanne couldn’t speak more highly of the staff that cared for him at the Manukau SuperClinic.

“The [staff] are great at the [Manukau] SuperClinic. The Colorectal Nurse Coordinator Suzanne Marshall – she was very supportive of us. We could just ring her and talk to her,” Haawi’s wife Joanne says.

“His surgeon Dr Sze-Lin Peng and her team were awesome. When she went through the process [of the operation], she just told us how it was. She said it in a language we could understand. He was really lucky. He had really good people look after him.”

A retired rigger, Haawi now looks after some of his mokopuna. He’s grateful for the support of his whaanau.

“They pulled me through. They were there for me, especially my daughter Natasha. She said ‘Papa come stay here [at my home], so you don’t have fight over the toilet’. She said stay here as long as you like. Our mokos - we told them about my cancer and they said ‘oh you better get well Poppa’,” Haawi says.

“When COVID-19 went to level 2, my niece came looking for me. She was wondering where I was. She wouldn’t take no for answer my niece until she found me.”

Although Haawi had his ups and downs during his recovery, he’s grateful he did the test. He wants to encourage others to do the same.

“If my wife wasn’t around, I wouldn’t be sitting here. I had an MRI scan at Middlemore [Hospital] and they told me there was now no cancer in me,” he says.

“Do it. Go and check yourself out. It’s worth it. Don’t beat around the bush like me.”

The National Bowel Screening Programme is now back up and running after it was halted due to COVID-19. All tests and treatment under the national programme are free for eligible participants (people aged 60- 74 years who are eligible to receive public healthcare, and who are not currently receiving treatment, or surveillance for bowel cancer).

Due to COVID-19, bowel screening test kits will not be sent in the mail to those eligible around the time of their birthday.  Kits will now be received three - four months after the month of the eligible person’s birthday. They will receive an invitation letter, home testing kit and consent form.

“Please encourage relatives of the screening age to do the test. It’s important, particularly for our Maaori and Pacific communities, to talk about doing the test with their whaanau to normalise the conversation on bowel screening and early detection,” says clinical lead for the Counties Manukau Health Bowel Screening Programme Dr Adele Melton.

“If you or a family member have received a test kit, please do the test and send it back. You can also drop your kit at a Labtests centre in Counties Manukau. If you haven’t received a test kit or need another, please phone 0800 924 432 to request one,” Dr Melton says.

10 months ago Less than a minute to read Communications Team