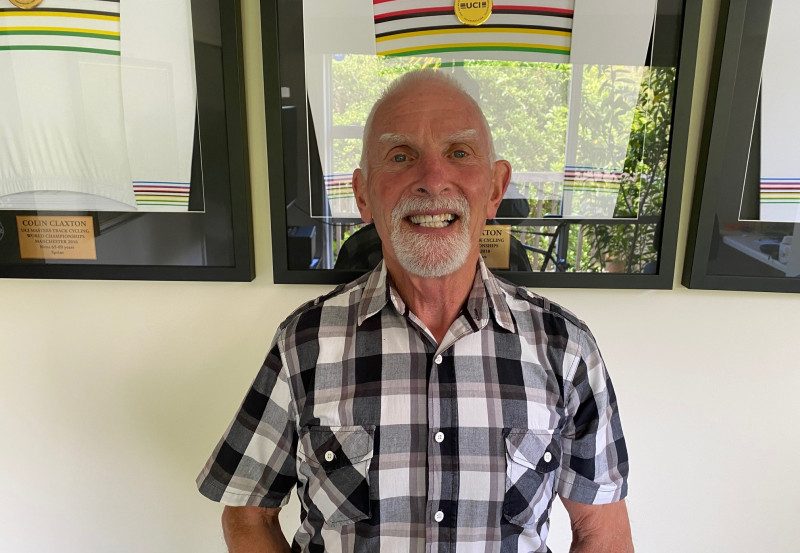 Latest News 3 February 2021 | Being a five-time UCI World Masters Track Cycling champion, 72-year-old Colin Claxton is as healthy and fit as you can imagine, so when the bowel screening test came in the mail, he knew he had a promise to keep.

“My son-in-law, who was married to our eldest daughter, was only 34 when he was diagnosed [with bowel cancer]. He lived another two years. At that time, they had two little boys. One was two and the other was four when he was diagnosed. They don’t have a lot of memories of their dad, but part of my mission in life is to keep their dad’s memory alive,” Colin says.

“When a good cycling friend was diagnosed terminally with bowel cancer, he looked me square in the eye and said ‘you promised your son-in-law you would get screened. Now you must promise me’. In some ways, what’s happened recently has been a fulfilment of that.”

Soon after doing the bowel screening test, Colin got a notification in the mail to say his test was positive.

“My wife did her test a couple of weeks before. Her test came back negative. We were fully expecting mine to be as well, so it was a shock. I got information in the mail explaining what happens next. Within a day or two, I received a phone call from Hannah (bowel screening nurse) who explained everything to me really well. She did follow-up calls to make sure I kept on track through each step before I went in for a colonoscopy [on the 11th of January],” he says.

“When I woke up from my surgery, Hannah was at my bedside. It was very nice to finally meet her. The whole procedure and the communication was excellent.”

The colonoscopy showed that Colin had a couple of internal haemorrhoids, as well as showing he has diverticula – a condition in which small, bulging pouches develop in the digestive tract. Thankfully, there was no cancer.

“When you get to 72, when these things happen you think ‘how do I process this?’. I didn’t appear to have any symptoms. Right through Christmas and New Year this was hanging over me. I told close family. We’ve got four kids all married with 14 grandchildren. One branch of the family is in France, so we told them over FaceTime. I was able to tell the others face-to-face. They all waited with baited breath on what was going to be the outcome,” he says.

“I expected the worst and hoped for the best. I know so many brave people who have battled their way through cancer. I hoped I could be as brave as they were if I didn’t get a good result after the colonoscopy. It was a certain amount of relief to find it wasn’t cancer,” he says.

Colin wants to encourage everyone in the community who receives the bowel screening test to do it.

“Don’t delay it. Anybody who is over 60, especially in the Counties Manukau area, if you got the test in the mail, do it. I belong to the Counties Manukau cycling club. There’s a lot of people who belong to the club who are over 60 who would have received the test in the mail. I’ll be saying to them, ‘hey did you get the test through the mail and have you done anything about it’. If they haven’t I’ll share my story. If they don’t have the test, I’ll give them the number to call to get one sent out and encourage them to do it.”

The National Bowel Screening Programme is now back up and running after it was halted due to COVID-19. All tests and treatment under the programme are free for eligible participants (people aged 60- 74 years who are eligible to receive public healthcare, and who are not currently receiving treatment, or surveillance for bowel cancer).

There is however a delay due to COVID-19; bowel screening test kits will not be sent in the mail to those eligible around the time of their birthday.  Kits will now be received three to four months after the month of the eligible person’s birthday. They will receive an invitation letter, home testing kit and consent form.

“Please encourage relatives of the screening age to do the test. It’s important to talk about doing the test with their whaanau to normalise the conversation on bowel screening and early detection,” says clinical lead for the Counties Manukau Health Bowel Screening Programme Dr Adele Melton.

“If you or a family member have received a test kit, please do the test and send it back like Colin did promptly. You can also drop your kit at a Labtests centre in Counties Manukau. If you haven’t received a test kit or need another, please phone 0800 924 432 to request one,” Dr Melton says.

19 months ago Less than a minute to read Communications Team