Keeping the Queen’s Honours in the family 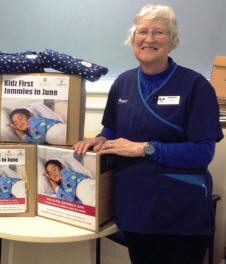 Latest News 03 June 2020 | CM Health is proud to have one of our own honoured in the Queen’s Birthday Honours list with a Queen’s Service Medal.

Rhys Bean, an MRT in the Radiology Department for 51 years, is no stranger to the Queen’s Birthday Honour’s List, with her mother also being a past recipient of the Queen’s Service Medal.

Rhys has supported the wider Auckland community for many years, and has also been a dedicated volunteer in the health sector.

As well as volunteering for more than 35 years as Heart Kids New Zealand, she has been a Meals on Wheels driver for many years; and a frequent visitor to Kingseat Hospital’s children’s ward, offering her support and time. She was also a supporter of the Bereaved Parents Association for 25 years.

In her work at the Radiology Department, she has been an energetic and enthusiastic teacher of student MRTs, as well as the driving force behind her department supporting the ‘Jammies for June’ project at Middlemore Hospital, collecting pyjamas and donations for sick children.

In addition to her work for CM Health, Rhys was a funeral celebrant for 29 years, officiating at more than 4,650 funerals in her time.

She was a layperson representative on the Auckland District Health Board’s Heart Registry in 2000 and a standing committee member of the Auckland Anglican Diocese for 11 years. She was also part of an educational sub-committee that was involved in plans for the development of a Friendship House drop-in facility for Manukau City.